Palace of the Blue Butterfly | Episode 8

Okay, so I’m a romantic. I admit it. Maybe because I’m from the South, but I love the Gothic. I love crumbling buildings draped with vines, overgrown gardens with a bit of wildness in them, anything scented and sultry and dark.

The hyacinths I wrote about are now gone, but the Lilac — OMG — planted right by the (antique, of course) gate smells divine. It makes even carrying groceries from the car a romantic experience. The lilacs will fade, and in their place, the old Bourbon rose, Madame Issac Perrier, will bloom. After that, I HAVE to have gardenias.

This summer I’m going to try growing the gardenias in containers on the porch. I’m even going to get a misting fan — one of those reproductions that looks like it could have been in Havana in the twenties — to give them the humidity they need. It will be worth it, though. The scent of white gardenias on a summer evening will transform hot, hot August into something well, romantic.

And because I’m southern and grew up with a lot of storytellers, I listened to many ghost stories out on the porch at night. I can still hear them in my head along with the moths batting against the screens and the frogs croaking in the creek. Well, put all that together, and, I guess, I’m a natural for Romantic Suspense.

As I was growing up, the south was modernizing fast, so by the time I got to Mexico, that country seemed more southern to me than the south, more gothic, more brooding and, yes, more romantic, like this hacienda on the left.

Doesn’t this ruin sort of remind you of what the setting might have looked like if Daphne du Maurier’s Rebecca had been set in Mexico?

A confession. I’m working on a novel set in one of these crumbling old hennequin plantations in the Yucatan. Like Rebecca this as-yet-untitled-book has ALL the gothic elements of my kind of Romantic Suspense: the independent woman of little means, the brooding mansion, the secrets, the malevolent presence, the wounded hero. And the Yucatan? That, too. Just imagine the colonial ruins, the cenotes, the howler monkeys, a naive protagonist, a wealthy, jaded expat. Hey, I’m there! 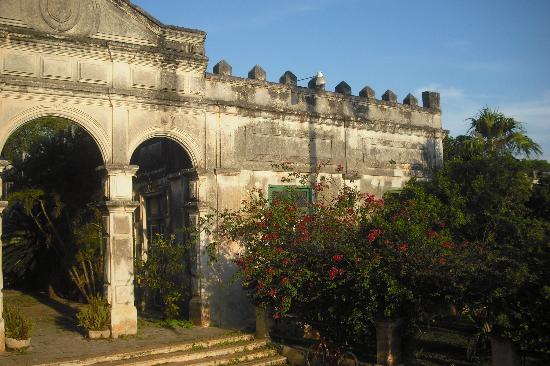 You see, I envision writing a series of novels, each one set in a different location in Mexico. Bird of Paradise (my first novel) is set on the west coast of Mexico, and even though the drug lords roam the streets and highways, there’s still the feisty protagonist of little means, the secrets, the brooding… well you get the picture. Of course, Palace of the Blue Butterfly , set in Mexico City, has, as you know, all those things and more, and now . . . Well, you just have to click and listen to find out.