Soy tu Duena is a Telenovela (in which) Fernando . . .

Palace of the Blue Butterfly | Episode 15 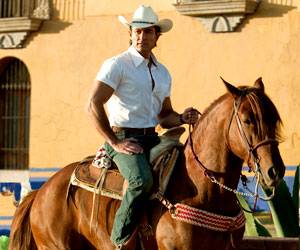 First of all, let’s hear it for the Mexican cowboys in general. If it weren’t for the charros, we would never have had the words lasso, or rodeo, or corral or even known about chili over a campfire. You know, let’s just consider for a moment where many of our Western equestrian skills come from. Not John Wayne, I assure you.

Secondly, let’s hear it for specific Mexican cowboys like my neighbor Felipe who taught Dave how to spray the cows for flies yesterday. No, we did not spritz them with little bottles of OFF. The whole deal required a backpack sprayer and a huge hose. Plus we, had to lure them into the corral and then into another smaller pen all the while making sure to mantener la calma , because you sure as hell don’t want to piss off a 1500 pound steer who is about to get his “private parts” (as Felipe so delicately put it for my benefit) hosed down with RAID or whatever it was.

And finally, let’s hear it for Fernando Colunga who plays a poor but honest rancher in the telenovela SoytuDuena. It is with his help I am going to get through the hottest part of the summer.

Up here we get a few 100 degree days–hot as a furnace. I plan for them the way people in Minnesota must plan for blizzards. I stockpile things to drink, easy things to cook and yes, Mexican telenovelas (You can order Soy tu Duena from Amazon). I call it “practicing my Spanish.” Right. Okay. Whatever.

There was a theory floating around when I was teaching that claimed you had to activate the limbic section of your students’ brains if you wanted them to retain the lesson, and ladies, if Fernando Colunga does not activate your brain, you need to call 911 immediately. Something is seriously wrong! 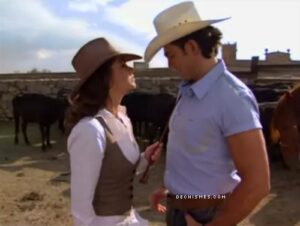 A brief plot summary of Soy tu Duena, which, in this setting, means “I’m Your Boss-Lady”:

Valentina, a rich girl from Mexico City has been jilted at the altar, so she retreats to her family’s fabulous hacienda in the state of Hidalgo. She’s used to ordering people around and getting what she wants. Here’s Valentina making that point very clear to Jose Miguel.

Girls, you don’t even NEED to SPEAK Spanish to get the whole story, but let’s continue.

Needless to say, getting all attitudinal with Jose Miguel doesn’t go over too well. He takes an instant dislike to the rich chilanga. But, when Valentina is bitten by a rattlesnake, who comes to the rescue? Jose Miguel. He carries her to his little ranchito, rips off his shirt to make a tourniquet, and then sucks the venom out of her foot.

What a gentleman. Que caballero! See what I mean about Mexican cowboys? 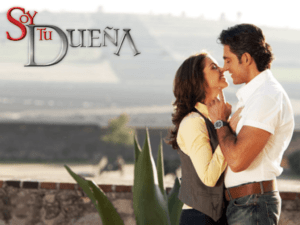 Never mind that her foot would have already turned blue and would have swollen to about the size of Rhode Island. The Spanish translation of “willing suspension of disbelief” is Fernando Colunga.

Poor Dave is going to have to put up with this for I don’t know how many episodes. But hey, it’s payback time. How long did the NBA season last? And before that, football season? When my whole TV room turned into man land?

Maybe you actually live in Minnesota. My advice? Save this telenovela— Soy tu Duena—, or other telenovelas you can get on Netflix, for the depths of winter. You’ll instantly be transported to the tierra del sol. Trust me. These soap operas ARE NOT your mother’s “As the World Turns”. 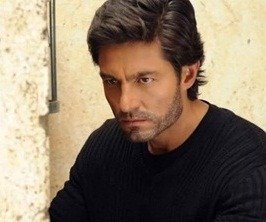 I don’t know how you picture Alejandro from Palace of the Blue Butterfly. Maybe something like the picture on the right? Not bad, huh? Maybe a little greyer, a little older, but still a brooding version of . . . Fernando Colunga.

Something to keep in mind when you listen to the next episode.