Costa Alegre: Where I go from Mexico City

I’m a little sad to be leaving Lili and Mexico City behind. I’ve loved roaming around there in my imagination. I’ve loved being those people.

If you’re thinking of writing a novel or stories, there is no better reason to do it than the feeling you will retain afterward of having lived another life, of having seen the world through completely different perspectives.

Forget the fame and fortune part. This is the only thing that matters.

And for that, practicing your craft daily, rather than worrying about all the other junk—like what kind of paranormal, vampire young adult novels agents are seeking—is what matters.

That’s where I go from here, shaping sentences and paragraphs until I hear a character’s voice, until she steps out of nowhere to tell me her story, to let me be her for a while.

The other day I read a lovely little quote in the New Yorker by the writer Jhumpa Lahiri that really spoke to what I’m feeling now. “Every story is foreign territory, which, in the process of writing, is occupied and then abandoned. I belong to my work, to my characters, and in order to create new ones, I leave the old ones behind.”

I’ll be working on the last draft of my almost completed Romantic Suspense novel called Bird of Paradise. I’ll fill you in a bit as I go, but I just came up with another character I want to introduce into the story—Rick Murphy. Well, maybe he was the one who decided he wanted to be included. Anyway, he just appeared at the end of chapter one, sitting on a chair in front of his motel room on the beach, watching my protagonist Bee run up from the water’s edge. 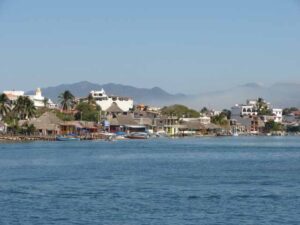 Bird of Paradise is set on the west coast of Mexico—the Costa Alegre—, in funky, little beach towns like the one on the right, in sublime homes of the wealthy jet set, high up in the mountains of Nayarit, and in the dangerous Drug-Lord controlled town of Tepic.

I’ll be reading the first chapter on KVRP in February. If you are in range, be sure to give a listen.